Colorado’s Mount Lindo Cemetery and Mausoleum rests on top of a mountain that overlooks Highway 285 and Denver. On the East side of the mountain is the largest lighted cross in the United States. The history of the lighted cross goes back to the Olinger family, who founded the Olinger mortuary company in Denver in the 1890s.

George Olinger Sr., son of Olinger mortuary founders, John and Emma Olinger, bought Mount Lindo in the 1930s. He later sold it to Francis S. Van Derbur, who was married to George’s daughter, Gwendolyn. Van Derbur originally intended to develop the mountain, but instead he made it into a cemetery in 1963. His father, Francis C. Van Derbur, expressed an interest in being buried on Mount Lindo with the spot being marked by a cross. Francis S. had the famous lighted cross installed on the East side of the mountain so his mother, Pearl, could see it from her home in Denver’s Park Hill neighborhood. 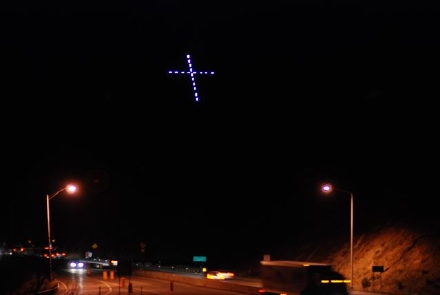 The cross is 393 feet high and 254 feet across, and can be seen from the highway and parts of the city it watches over. It was partially conceived by designer Donald Lee Frees, who also worked on designs for many Olinger buildings, including the Tower of Memories at Crown Hill Cemetery. The cross was first lighted on Easter in 1964.

The Mount Lindo cemetery gates are on South Turkey Creek Road just off Highway 285 near Tiny Town. Mount Lindo rises 7660 feet above sea level and is owned and operated by Olinger Mortuary.

Photograph:
Mount Lindo Cross from the Morrison exit off Highway 285, 10 November 2006; You can click on the photo for another, larger view.

This entry was posted on Friday, March 16th, 2007 at 3:13 pm and is filed under Christian. You can follow any responses to this entry through the RSS 2.0 feed. You can leave a response, or trackback from your own site.