Neil Gaiman and His Deathly Delirious Graveyard Book, a Review of Sorts 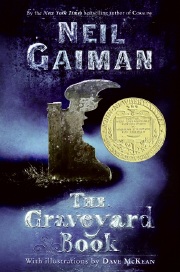 My favorite Neil Gaiman character is Delirium from the Sandman series. She gets to wander around acting delightfully delirious all the time without caring at all what other people think. I also like her sister, Death, the pale, dark-clad Goth girl who shows up when someone dies, probably surprising those who expect a tall silent guy with a scythe. When I go I want her to show up, and hey, bring your crazy little sister. You see, we’re afraid of the guy with the scythe. But a cute Goth girl with an Ankh, well, that’s comforting. Especially since her little sister is so happily delirious.

While working on the Sandman series, Neil Gaiman started writing real books, you know, those books without pictures that boring adults like to read. Even when you’ve developed a ridiculously loyal cult following who eagerly anticipated each of the 75 issues of your comic book, you are clearly not respectable as a writer until you have mastered the art of writing important books called novels. And no pictures, please. That is so juvenile. A comic book writer? Hmm… Go sit over there. With the superheroes and burnt-out private detectives. Yeah, we make a lot of money off those Batman movies, but they’re still comic books. Kid stuff. For adults who forgot to grow up.

But Neil Gaiman had better ideas. He decided to write some picture books. You know, those things that adults sometimes read to small children. But small children are smarter than we know because they can read the books themselves by devouring the pictures. Some of these same children probably grow up to read comic books. The little rebels.

But Neil Gaiman was even more clever. He decided he would write actual novels too, some without pictures even. But occasionally — shh! — he would turn to his friend Dave McKean, an illustrator, yes the same Dave McKean who decorated all 75 of the Sandman comic book covers and those subversive children’s picture books. Neil would ask Mr. McKean (and others) to sneak some pictures into his novels. Maybe no one would notice. Except the children, of course, who know how to read both pictures and words. And so we have odd delights like Coraline and that book I’m supposed to be discussing here, but I just realized I haven’t even mentioned it yet. And look how many paragraphs have gone by….

Ah, the Graveyard Book. Words by Neil Gaiman. Skipped-over-by-adults illustrations by Dave McKean. Yes the book is filled with interesting pictures and words, conversations even. But it’s the characters who really make the book interesting. No Sandman characters here, but there is a bit of death in the Graveyard Book. As there should be. It has a tiny dash of delirium too.

The main character is orphaned when Jack (possibly the Ripper) kills his entire family. The surviving toddler wanders away from the carnage until he reaches the ancient town cemetery where, after much discussion, he is taken in by the cemetery’s inhabitants. You would probably call these inhabitants, ghosts. The ghosts name the child Nobody, or Bod for short, and raise him in the cemetery. Bod grows up surrounded by all sorts of interesting dead people and assorted night creatures.

In one chapter Bod is dragged into an adventure with a group of scruffy ghouls who have names like “the famous writer Victor Hugo,” “the Bishop of Bath and Wells,” and “the 33rd President of the United States” (Harry Truman for those of you too busy to Google it). Early in the book he meets a living girl called Scarlett whose parents think Bod is her imaginary playfriend. Even Scarlett herself isn’t sure. Later he meets a witch who was “drownded and burnded and buried here without as much as a stone to mark the spot.” “You were drowned AND burned?” Bod asks her. Bod befriends the witch, an outcast.

Along with all the cool characters there are some fine stories. Each chapter is like a mini adventure. My favorite is when Bod takes on a school bully. How to scare a bully: have him follow you to scary place, like, oh, how about a cemetery? Boo! Bully runs away. And doesn’t pick on the little kids anymore. But of course it doesn’t work out exactly as Bod had planned. But having ghosts on your side can be a good thing. They can teach you important things like how to Fade and dreamwalk. And the difference between the living and the dead. But cemeteries aren’t really scary places. It just depends on your point of view. And your perception of cemeteries will likely be altered by the Graveyard Book.

Earlier this year the American Library Association (ALA), an organization made up of actual adults, gave their golden Newbery award to Neil Gaiman for the Graveyard Book. I should mention that the ALA announced this award at their annual meeting in my city of Denver, which seems to have become the place to give out awards and nominations and other important adult things. I’m sure these learned adults didn’t even notice the pictures cleverly hidden away in the book. Ah but wait, the ALA also gives out an award called the Caldecott to a picture book illustrator! They are children after all. And so are you. If you like the Graveyard Book.

The Graveyard Book can be ordered from Amazon. Or try your wonderful local bookseller.

Advertising Disclosure: The owner of this website is a participant in the Amazon Services LLC Associates Program, an affiliate advertising program designed to provide a means for sites to earn advertising fees by advertising and linking to amazon.com.