On Jewish tombstones you will sometimes see a symbol showing two hands arranged for the Priestly Blessing like the example here. This is a symbol of the Kohen or Cohen (Hebrew for priest). The plural form is Kohanim or Cohanim. Kohanim are assumed to be direct male descendants of Aaron, who was the first Kohen and the brother of Moses. Some Jewish surnames frequently associated with this symbol are Conn or Cohn (Kohn), Cahn (Kahn), and Cohen (Kohen), but you will find the symbol on the grave markers of people with other surnames. Today families can sometimes verify a priestly lineage from the tombstones of ancestors that have this symbol.

And yes, Star Trek fans… You’ve probably noticed the similarity between this symbol and the Vulcan hand greeting (“live long and prosper”) used in the TV show and movies. This was suggested by actor Leonard Nimoy (Mr. Spock), who saw the Priestly Blessing in a synagogue when he was a child. He modified it as Vulcans use only one hand. See: The Jewish Origin of the Vulcan Salute 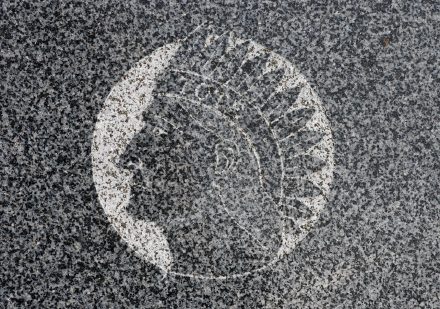 The all-seeing eye, also called the Eye of Providence or Eye of God, has origins dating back to the Eye of Horus in Egyptian mythology. It has been adopted as part of the Great Seal of the United States, which shows the all-seeing eye floating on top of a pyramid. This can be seen on the back of the one dollar bill. It is often associated with conspiracy theories involving UFOs, the Illuminati or Freemasonry. It is also featured in the 2004 Disney film, National Treaure, and in J. R. R. Tolkien’s Lord of the Rings trilogy as the Eye of Sauron.

In cemeteries the all-seeing eye symbol is usually found associated with Freemasonry or the Independent Order of Odd Fellows, like the example here. The letters F, L and T inside the chain links stand for Friendship, Love, and Truth.

This symbol, which looks like a dollar sign ($), is actually the letters I, H, and S superimposed over each other. These represent the Greek letters Iota (Ι), Eta (Η) and Sigma (Σ), which are the first three letters of Jesus in Greek. See IHS Monogram for more information.

Leaving Pebbles or Stones on a Grave Marker

The Jewish tradition of leaving a pebble or stone on top of a tombstone signifies that someone has honored the deceased person’s memory with a visit to the grave. A nice example of this is shown at the end of the movie Schindler’s List.

For more information on this tradition see: Why do we place pebbles on grave stones? by Rabbi Tom Louchheim 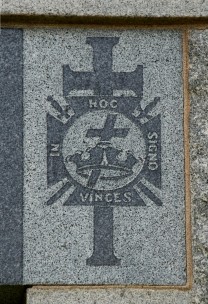 This photograph is of a Masonic Knights Templar symbol showing a cross within a crown inside a Maltese cross, which has the Latin phrase, “in hoc signo vinces.” The phrase means “in this sign you shall conquer” and was used by Constantine as a military motto in the early 4th Century. The phrase was also used by the original Knights Templar military order that was founded during the Crusades. The Freemasons began using Templar rituals and symbols in the late 1700s.

Knights Templar legends and myths are quite popular in movies and books such as The Da Vinci Code, Foucault’s Pendulum, National Treasure, and Indiana Jones and the Last Crusade. Some also see parallels between the Jedi Knights of Star Wars and the Knights Templar military order.